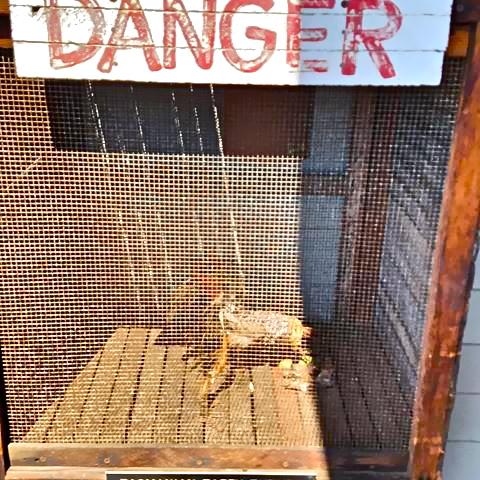 SANTA BARBARA, CA – A fixture on Stearns Wharf for four decades, the ghastly, spasmodic electric chicken that marks the entrance to Mother Stearns Candy Shop has been officially diagnosed. The verdict? Local news outlets are reporting the twitching, featherless freak has mange.  “I knew it all along,” says wharf neighbor and well known fortune-teller Madame Rosinka. “You don’t need a crystal ball to see that the bird’s seizures and restlessness have long indicated sarcoptic mange.”

The gag-reflex inducing mechanical chicken—known colloquially as the Taffy Turkey for its disturbing mimicry of a bald, maddened bird desperately yanking at a filthy hunk of taffy— had been driving customers away from the renowned candy shop of late, as well as from other businesses on the globally beloved Santa Barbara pier. It was this marked impact on the waterfront business climate that ultimately compelled the Stearns Wharf Merchants Association to pool their resources and pay for lab tests on the plumage-denuded horror fowl.

Now that the mystery has been solved and remedial steps taken, the awful bird’s coat of feathers has begun to grow back and Stearns Wharf merchants are breathing easier. “Hey, we used to do a booming business in chicken dishes,” said a waiter from nearby Moby Dick restaurant. “Till that ravaged and yet iconic Mother Stearns nightmare bird began its disgusting decline. We hope we’ve turned a corner.”